i. Why Use Verdi GUI?

Verdi GUI is a small program that allows a Windows computer to interface with a Coherent Verdi laser via RS-232.

Verdi GUI is a faster and safer way to operate the laser as it almost entirely eliminates the need to physically interact with the laser. Additionally, it automates the logging process and allows for real-time display of all of the laser’s operating stats on one screen, which enables better monitoring of the laser’s health.

The latest stable version of Verdi GUI is version 1.1.1.

Verdi GUI is is licensed under the MIT License; the source code for Verdi GUI can be found on GitHub.

A copy of the Windows installer for Verdi GUI can be found on the lab PC in Equipment/Optics and Lasers/Lasers/Verdi. 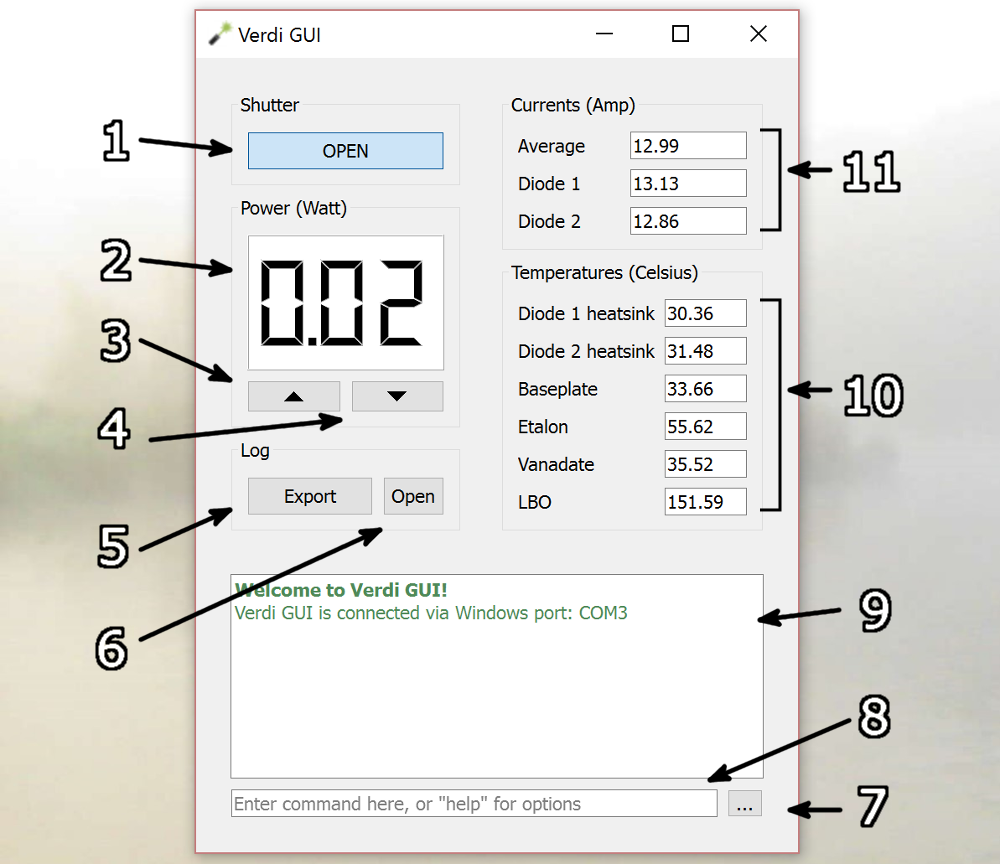 A full list of valid serial commands can be found in the Operator’s Manual for the laser.

It is not recommended to change the power setting by more than 10 mW at a time, as that may cause damage to the Verdi. However, if you are certain that you know what you are doing, then the power can be set by sending a serial command to the laser, “POWER = n.nn”, where n.nn is the new power setting in watts.

This cannot be accomplished by Verdi GUI alone. However, an external system is currently under development that will allow sub-milliwatt adjustments. Ask Lise, Mokter or Alireza for more information.

iii. Why am I unable to export?

Double check that the log file is not currently open. Verdi GUI cannot write to a file that is in use.

If the file is closed and Verdi GUI still cannot export, make sure that you have permission to write in the folder that Verdi GUI is installed – “C:/Verdi GUI/” by default.

iv. The shutter is open and the laser is on, but light is not emitting.

Did you turn the keyswitch to the “ON” position? Verdi GUI cannot operate the keyswitch – it must be operated manually by the user.

v. The diode average current shows 0 A, but each diode has a small positive current.

This is a known issue with the Verdi laser. After the laser is put into standby, it stops checking the individual diode currents and instead will keep showing the last known diode current until the laser is turned back on.

Follow the instructions in the Operator’s Manual to rectify the fault, then click “Okay” to tell Verdi GUI that the fault has been cleared. Verdi GUI cannot clear faults on its own, since clearing faults usually requires physically manipulating parts of the laser.

vii. Where can I ask other questions?

You can ask Lise in person or by email.